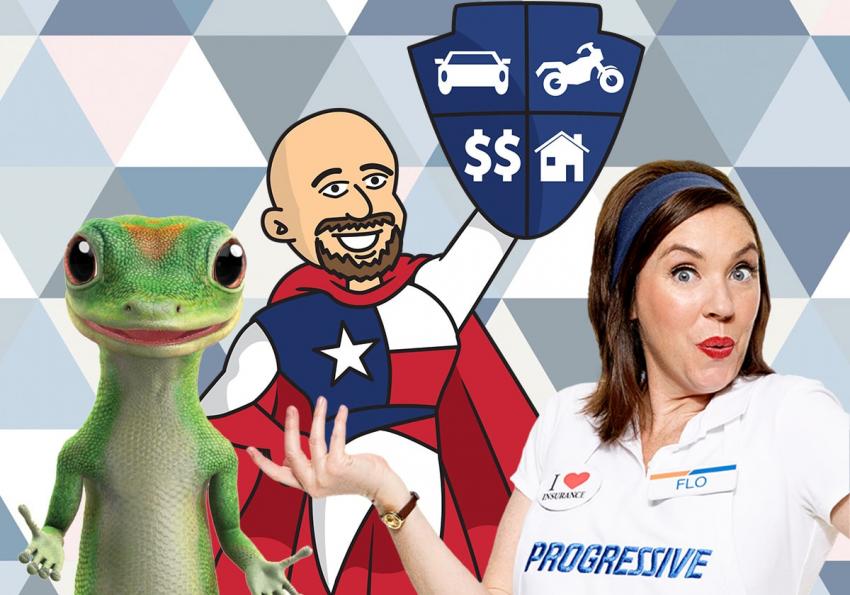 One of the great things about car insurance commercials is the mascots that they have. They have been seen in Superbowl ads, TV show commercials, and even heard in radio ads. They can be seen on billboards as well. These are celebrity characters, and they are incredibly memorable. Not all of them can be on the list of top ten car insurance mascots though, onward to the countdown!

Taking the number tne spot on the list is The General, representing The General. This character is an animated character with a long white mustache. A shorter man, he is dressed in a green uniform shirt, green helmet, and wears yellow pants. Wearing combat boots, his commanding voice and big personality give commercials for the company attitude. Sometimes the commercials involve him with an actual person as the commercials costar, and sometimes he stars in the commercials himself. The cartoon is simple but also extremely memorable.

While the characters name is not the easiest to remember, J.K. Simons stars in the Farmers commercials as Prof. Daniel Burke from the University of Farmers. Using hands-on learning experiences, this memorable professor teaches his students about automobile insurance, and what Farmers Insurance Group has to offer.

As a double agent, Erin Esurance is an animated cartoon mascot brought to life by the company Esurance in the year 2004. Being an undercover agent is hard work, and protecting the world from evil is one of her biggest goals. The other goal that Erin Esurance has is making sure that people are not paying more than they need to for their auto insurance policies. Getting the best prices for automobile insurance means getting a free quote on car insurance from Esurance, and undercover super agent Erin Esurance is here to let the world know.

In the year 1985, Snoopy became a fixture in MetLife commercials. The Peanuts came to life and warmed people’s hearts around the world before this. MetLife utilized Snoopy and his supporting cast to help people feel secure with the insurance policies the company sells. By purchasing a car insurance policy from MetLife, you are getting insurance from a company that is financially secure and customer service friendly. The company still uses the Peanuts Gang in its commercials, though not quite as much is it used to in previous years.

6. The Gecko from Geico

Along with a catchy slogan, GEICO has created numerous memorable characters. Some people like the Geico caveman better than the Geico Gecko, but for this list, the snarky gecko comes out on top. There have been commercials from the company that have featured both of them, and it is a marketing campaign that is still utilized today and incredibly popular. The caveman from Geico were also incredibly well received, and popular enough to get their own TV series. The show was canceled after six episodes, but the memory of Geico’s mascots remains strong.

Featured in Progressive commercials since 2008, actress-comedian Stephanie Courtney has been the friendly spokesperson for Progressive Insurance for many years. Flo has appeared in over 100 commercials for the company, and few people know that the concept for the character was an accident built on during her audition. With over 5 million likes on Facebook and a huge Twitter following, Flo from Progressive is highly known and well loved.

The concept behind these commercials is that boring sales calls are turned into hilarious sketches. Generally speaking, Jake is only featured for a few seconds and only says a few words, but they are incredibly recognizable and highly memorable. The actor who plays Jake is a former State Farm agent, and while he does not currently play the role any longer, people still remember his commercials.

3. Stack of Money from Geico

Geico is the only company that has three mascots mentioned on this list. Even though only two of these three are featured on this list, GEICO takes its marketing seriously. This mascot is simply a stack of money that has large eyeballs and loves to talk car insurance. With his own theme song, “Somebody’s Watching Me,” this is a mascot that people who have seen it definitely remember.

Created by Leo Burnett Worldwide in the year 2010, this is one of the more recent mascots, and also one of the best. Actor Dean Winters plays a character that winds up in every not so great situation a driver can. Mayhem has his own YouTube playlist, which has over 2 million views. He has 1.9 million Facebook followers and a massive number of Twitter followers as well. Playing a villain in the commercials, he recommends that people get Allstate insurance to stay protected from Mayhem like him.

The Mayhem character was created to increase awareness about Allstate as a brand, and it worked exceptionally well. Dean Winters character allowed them to target a younger audience but also had a lot of crossover with all demographics. The ad campaign surrounding the character was extremely creative, even winning awards.

1. The Duck from Aflac

The number one mascot for a car insurance company is the Aflac Duck. The Aflac Duck is the characters official name, making its first appearance in the year 2000. The duck quacks the company's name and has been featured in over 70 commercials. For many years, the duck did not have an actual voice, but in the year 2009 a voice was created. The character has been featured on numerous social networks and has its own accounts there. With over 750,000 followers on Facebook and over 60,000 followers on Twitter, The Aflac Duck has become not only a prevalent character but also massively increased Aflac's recognizability to consumers. The commercials that feature the duck are often hilarious, catapulting The Aflac Duck to the number one spot.

Terrell Forster 12/21/2019 - 06:57
It sounds silly, but it’s exactly Gecko and the Guardians crossover who made me buy my insurance policy. That was extremely memorable and play crucial role in choosing insurance company
Lilly Orr 01/04/2020 - 10:58
Mascot should be a mirror of the company. All of this characters clearly make a good ad, but i can't wait, when we see bureaucracy-man or something similar